I participated in the Ludum Dare 38 challenge. You can see my game entry here

A game jam is usually a competition amongst folks who try to make a game within a particular time period. Each game jam has its own rules, and many of them have themes.

Ludum Dare is a gamejam run by Mike Kasprzak @mikekasprzak.

The site for Ludum Dare: https://ldjam.com/

In this particular game jam there are two modes, Jam and Compo. For the jam mode, one must create a game and it'll get judged. Compo is like the jam mode but more strict. You must follow the theme and you must release the source for your game. I went with the jam because it said if you don't know what to do, use jam, so I did.

How did I get into this?

This was my first game jam, and one of the first few games I've ever created since becoming interested in game development. I didn't really know what to expect. I had a vague idea of how a game jam worked, but I didn't really know a lot of the details. I didn't know if it was for me. On a whim, I tweeted wondering about whether or not I should join Ludum Dare. The response was a resounding "go for it!". I don't usually get a lot of attention on twitter, so this motivation really had me take the dive.

Also, I think the constraints are interesting and kept me accountable to finish something, rather than starting up another project that may never be finished.

I already familiarized myself a bit with the tool I was going to use, PICO8, so I had a bit of an advantage there. It comes with a sprite editor, sound editor, and music editor. And while I didn't know how to really make sprites or sounds or music, the system is simple enough to where I could at least throw something together.

I wanted to make a sidescroller action game, where you had a specific amount of time to cause as much damage as possible. This means there's a win condition, and a certain competitiveness to getting a high score. I figured that should be enough to technically make it a game. I just wanted to finish something that could techincally be called a game within the time limit.

The feedback. was. AWESOME. Folks were generally really nice, and had clear and constructive feedback about my game. Overall, I'd say that the main bit of feedback I got was that the game was too 'simple'. I agree and I've been adding to it since, and I think the game has become more fun as a result.

Playing the other games was really inspiring. I generally don't consider myself a particularly creative person in an art sort of way, and seeing all these games really challenged how I thought about games and game development. Check out some of my favorite games that I got to play during the judging phase:

Incidentally, Super Kaiju got 4th place and Smalltrek got 1st in Compo. These games are amazing and you should check them out!

Well, I didn't get a great score: 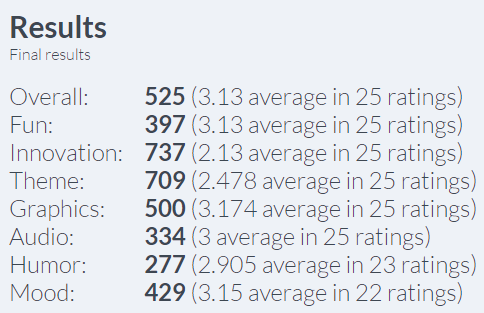 Rank 525! Yowch. I think there were at least a couple thousand entries overall.

But, I think the rank is fair and I think they are more or less what I expected when I submitted the game. I knew going into it that the tie to the theme and the innovation were weak. I didn't expect to do so well in Audio, so that was a surprise! So that's not so bad :)

When we got to judging phase of the gamejam, it became very clear that I have a long way to go. Simply put, some of these games really blew me out of the water.

Overall, I have a lot to learn about making art, game design, making sounds and music, and really just everything about game development. I definitely struggled on the art and music, I don't generally know what makes things fun or not, I am not particularly creative with the type of games I think to create. On the upside, I guess I can only get better from here!

I think overall, I was successful. I made a game in the time limit, got some great constructive feedback, and learned so much.

Would I recommend? Would I do it again? Will I participate in more game jams?